New user here. I've been evaluating ADSP for about a week now for possible recommendation to to my clients, as I'm a self-employed computer consultant that's been in the industry for almost 40 years now.
Lab setup. I'm on a Server 2019 domain. ADSP is installed on a Win 10 workstation that's joined to the domain. I refer to this computer as the "Authentication Station". Forced enrollment is set up. It works. But not the way it's supposed to.
Once I do the remote install of the ADSP client software to the user workstation, users are not forced to enroll. Instead they get the "you're not enrolled" screen. However, if I uninstall the client sofwtare then (and only then) are users forced to register. But that's a moot point on a workstation without the ADSP client software on it, now isn't it?
After user registration I reinstall the ADSP client software on the workstation. Then as expected the user as to authenticate upon log on.
Now I called support yesterday (Friday, Dec 18, 2020) and was unable to reach a human or be placed into a queue. I was forced to leave a message for callback. This was around 1pm. I got no call back.
Now I'm quite sure that I'm not the only one that has experienced this problem, as I've seen posts on this board from years ago (with older versions of the program) and the response to those posts are always the same..... call support. One would expect that after so many years of this issue, there would be a FAQ somewhere that could be utilized before calling support. Better yet, instead of being told to call support, maybe the responder could reference the FAQ?  Most of the FAQs I can find are all sales pitches that contain no real useful "problem solving" information.
Now my setup is pretty much a "default" setup with a Server 2019 domain, a Win 10 workstation with the ADSP software installed/configured on it, and a Win10 workstation for the end user. Thanks for any help or suggestions that can be provided here.
-Carl
Useless tidbit of the day:
REASON - Why you can't.
EXCUSE - Why you won't.
EDIT: NEW INFO
On the user computer I get the following in the event log when user attempts to log on. Apparently an issue with the ADSPProvider.dll library file. 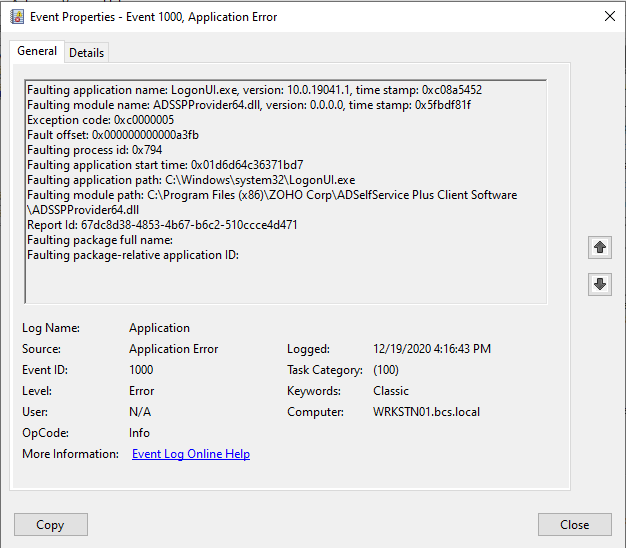